LOS ANGELES — Berry Tramel is on the phone, rattling off the first month of USC’s schedule with ease.

The Oklahoman sports columnist knows Sooners fans don’t have much faith in Rice on Sept. 3 but are more hopeful Stanford or Fresno State can score an upset over the Trojans in the subsequent weeks. Or maybe Oregon State in Corvallis in Week 4?

Tramel is confident most Oklahoma fans have committed USC’s early schedule to memory. He’s even more confident in what their feelings about the Trojans will be this fall.

“I would think if Texas played USC, that most OU fans would hold their nose and cheer for Texas,” Tramel said. “They wouldn’t want to, but I think they would.

The truth is, USC infuriated a lot of fan bases this offseason. So the sentiment that’s emanating from Norman, Okla., will be shared in Pittsburgh, in cities along the West Coast and wherever else traditionalists clutching to college football’s rapidly dying status quo may be.

Aside from the question of when it would inevitably fire Clay Helton, USC has been largely irrelevant on a national scale for quite a while. That changed in November when the school’s administration stunned the sport and hired Riley away from Oklahoma.

In the months since, USC has transformed into the most hated team in college football — one that will need to be entirely comfortable assuming the sport’s villain role this fall.

College football is in desperate need of new faces at the top of the sport and reasons to care about teams beyond the SEC and Big Ten. USC has been unapologetic about doing whatever is necessary — whether it’s hiring your coach, bringing in your program’s best players or leaving the Pac-12, the league it has called home since 1922 — to try to get there.

“I think sports needs villains,” Fox Sports personality Colin Cowherd said. “The Duke was a villain. That’s good for college basketball. I think Miami was a villain. USC is big-city.. … The sport has enough small towns. It’s got enough Southern football powers. What the sport needs is some big-city influence. It needs Miami, it needs Los Angeles. Notre Dame has a huge Chicago fan base.

“I think USC gave the sport juice. … It’s got enough hard-work ethos. It needs some glamor.”

As a Notre Dame fan, former player and graduate, Mike Golic Jr. believes his disdain for USC is pure.

“To me, they were the Death Star when I was growing up in college football,” he said. “We tend to hate things that are really good. Right now, I imagine a lot of people hate Alabama.

“Everyone hated USC because in the early 2000s they were turning over one Heisman Trophy-winning quarterback after another. They had everything everyone wanted. … They were rock stars around there, and they just kept winning.”

Shaun Cody was an All-American defensive lineman on USC’s 2004 national championship team. He sensed the contempt for USC when he got to the NFL in 2005.

“It always felt like other players from other schools had this vision of USC and what it was, and it always seemed negative,” Cody said. “We were ‘cheating’ in some regard. It was ‘fixed’ in our direction. You always got that sense from everybody else.”

So enthusiasm toward USC is nothing new. However, there’s been little reason to hate the Trojans the past decade, unless you grew frustrated with a program squandering just about every inherent advantage possible — a great local talent base, awesome weather, a massive media market and a weak conference.

Under Helton, there were two losing seasons, a shocking 63rd-ranked recruiting class in 2020 and countless embarrassments on the national stage. That era of USC football validated overworked cliches about nice guys finishing last.

That’s why USC had to move mountains (and a lot of money) to hire Riley, whom everyone perceived as unmovable.

Oklahoma responded with a splash of its own, offline respected defensive coordinator Brent Venables away from Clemson. That, combined with strong assistant hires and a fast start in the 2023 recruiting cycle, has distracted some fans for a bit. But nine months later, the corn still remains.

“Nobody in Oklahoma should’ve thought he was going to stay here forever or even a long time,” Tramel said. “But most people thought he would go to the NFL. The problem with when he left is not the time of year or any of that. But it’s the moment in history when all of a sudden the portal explodes, immediate eligibility, and he can sort of ransack the roster and take the quarterback, the young receiver who’s so good and that sort of stuff.

“That’s what infuriated a lot of people. That’s how they feel about it. The Sooners really gave him the chance of a lifetime, and (he) stabbed them in the back five years later.”

Riley’s words have sparked outrage from Oklahoma’s fan base this offseason. whether it was his letter in The Players’ Tribune explaining his decision to leave, or when he says he didn’t speak with USC until after the Bedlam game, or when he claims USC didn’t take players such as Caleb Williams and Mario Williams from Oklahoma, it took them from the transfer portal .

#USC‘s Lincoln Riley on The Herd today: “We didn’t take players from Oklahoma. We took players from the transfer portal. Those players and their families had to make a decision to stay at that university … or to enter the portal where they could be recruited by anybody …”

His detractors ask how Riley can say, “We’ll have to put in some guardrails” into the transfer portal yet bring in nearly 20 transfers — including the reigning Biletnikoff Award winner (Jordan Addison), one of the most prolific running backs in the Pac-12 (Travis Dye) and one of the best defensive players from a division foe (Eric Gentry).

Others counter that the transfer portal is the new frontier of roster-building and Riley has utilized it accordingly.

“I think stubbornness and rigidity are really bad qualities in 2022,” Cowherd said. “You’ve got to be fluid. You’ve got to be adaptable. It doesn’t surprise me that a really smart coach figured it out very quickly. Lincoln Riley is a very aspirational fellow, and I think he saw clearly what’s happening — that the sport’s changing.”

USC has found itself at the flash point of every major topic in college football this offseason. It was squarely in the mix of the coaching carousel and is partly responsible for the spike in salaries in recent months. It was on the front lines of the transfer portal and the introduction of modern-day free agency in college football. The name, image and likeness conversation was no different.

Some USC fans believe the program is behind with its NIL efforts; one group is trying to start a third-party collective against the school’s wishes. But other programs view USC as some NIL bogeyman, tempting their best players with sweet offers.

“SC, I mean everybody making money over there,” Arizona State defensive coordinator Donnie Henderson said this month. “I wish we had some of that money.”

The outrage about USC’s NIL efforts was never more rampant than during Addison’s transfer process. There were unfounded rumors Addison received a multi-million dollar deal from USC — which didn’t have a collective or any NIL apparatus set up at that point — and anonymous cries of tampering from the Pittsburgh coaching staff that were never verified.

Pitt coach Pat Narduzzi has been vocal about NIL — and Addison — this offseason. Some personalities in the Pittsburgh media haven’t been shy about their disdain for the Trojans.

“I hope USC loses every game this year,” local radio host Andrew Fillipponi said during a rant back in May. “They went 4-8 last year. … If I saw Lincoln Riley, I would pick him up over my head … and slam his ass because I could probably beat up Lincoln Riley. One of the few people in major collegiate sports that I feel comfortable with the guy in a dark alley. … He’s such a big, phony hypocrite. ‘College football needs guardrails. NIL is out of control.’ …It makes me sick.”

Throughout Addison’s transfer process, two sources denied NIL was the primary motivating factor behind his decision to transfer to USC. Addison called the rumors “BS” when he spoke to local media for the first time in early August. Riley shot down tampering allegations at Pac-12 Media Day in late July.

Of course when Addison arrived at USC he was going to have high-profile NIL opportunities. And last week, he unveiled an NIL partnership with United Airlines.

“I’m actually not down for hating USC for the reasons a lot of other people are right now,” said Golic, “because they’re just playing the game very well.

Cowherd added: “People hate what they fear. … USC is one of the few urban, big economy cities that likes college football, so it’s intimidating. If USC really wanted to back the truck up economically, plus the entertainment options, you could really have a situation where they could buy the top 10 players in the country every year.” 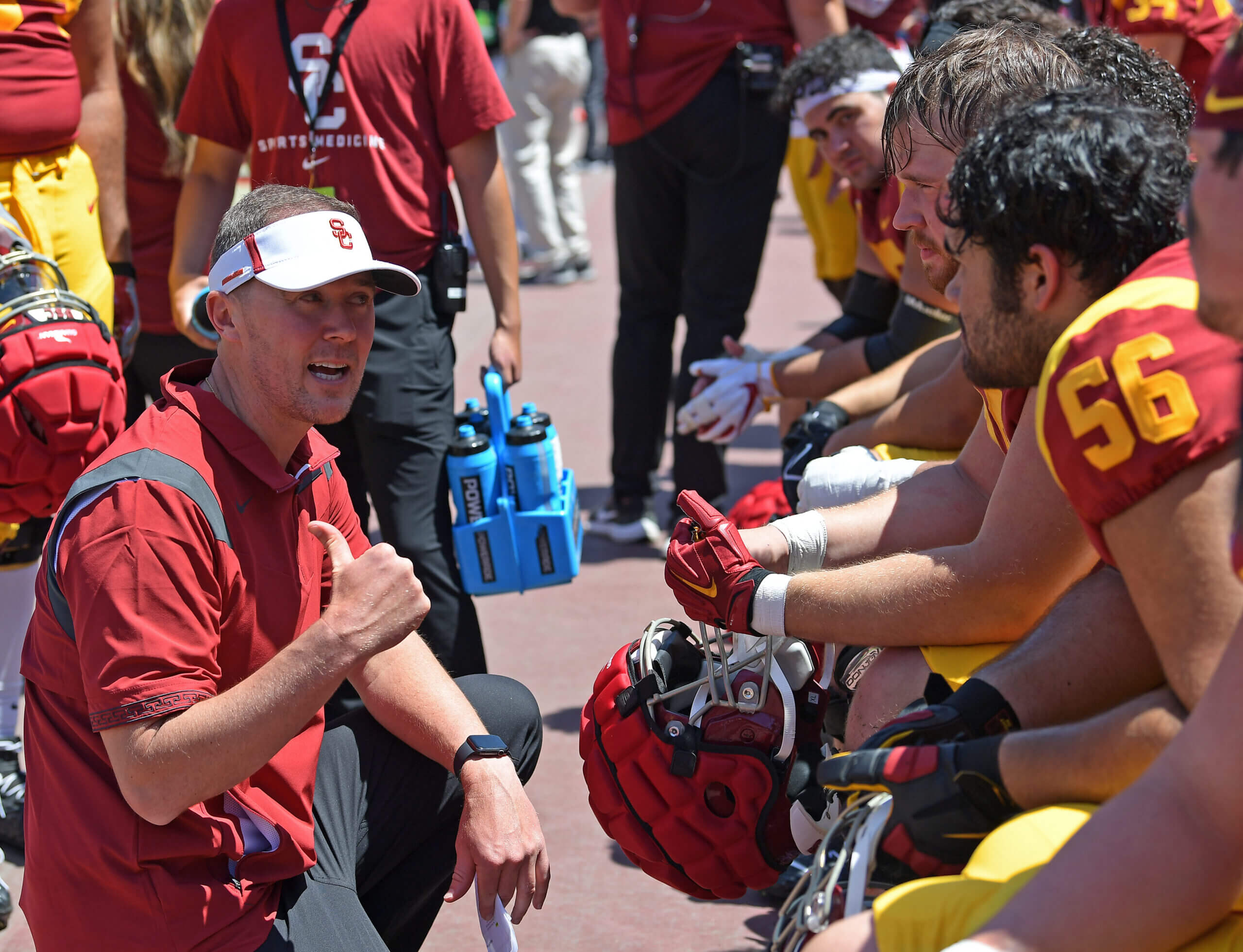 Cowherd realizes he can be perceived as a polarizing figure. He’s been far and away the Trojans’ most vocal supporter among national media voices. His tweets have probably escalated some of the hate USC has received this offseason.

But it was Cowherd’s post at 9:48 am PT on June 30 that hinted USC was about to hit for the outrage cycle this offseason.

The Riley hire, the transfers, the NIL talk … it’s debatable how much blame USC deserves from fans around the country.

But leaving the Pac-12 — and putting the future of its peers with whom it shared the conference for 100 years in peril — to join the Big Ten while expediting the death of major college football as we recognize it escalated those feelings.

USC made the move to ensure its future. Its leadership, specifically president Carol Folt and athletic director Mike Bohn, was heavily criticized in December 2019 for not moving on from Helton. Their decision to leave the Pac-12 was calculated in a way that blindsided everyone.

“USC and UCLA had already agreed with the other schools to move forward with the new negotiation of the media contract,” Arizona State president Michael Crow told The Athletic this month. “President Folt had made the case not to add anyone to the conference. So she had already weighed in, agreed with the plan going forward — while negotiating at the same time with another conference. It’s just odd. That’s just an unusual way to negotiate.

“I can tell you unequivocally that everyone was caught by surprise because we already had an agreement.”

In a statement, USC said: “We are not going to respond to conjecture and innuendo.”

Any Pac-12 school in USC’s position likely would’ve jumped at the chance to join the Big Ten — hell, some are still probably trying. Even though it spent a decade stumbling through the wilderness, USC, for all its flaws and missteps, is still the Pac-12’s crown jewel.

And with that move to the Big Ten, the heel turn is complete. USC is going to do everything in its power to win now, and it’s not going to apologize for it.

“My job is to make USC football the best I can,” Riley said, “and it’s not only to do it under a certain set of parameters. It’s to do it in the spirit of the rules that are put in front of us, and do it in the way the university prefers and that’s that. That’s my job. How people view that, that’s up to them.

“Whatever role we’ve got to take on to make USC the best it can be, I’ll be completely comfortable with it.”